My First Venture Into Lutefisk

Last evening I was given a very special ticket, one of only 350 for the Annual Lutefisk Dinner at the Lutheran church in Hanlontown, Iowa. This is my very first opportunity to try this Norwegian favorite, but this was not just about the Lutefisk but about a number of Norwegian/Swedish delicacy's.
Let's start with some notes on Lutefisk. Literally translated, Lutefisk means lyefish, which refers to the early process of soaking where a lye solution made of birch ashes was used in the "luting"   process. Lutefisk is Cod, or stockfish.

After being ushered into the auditorium and a word of prayer, we were called by table into the fellowship hall where the feast began in earnest! The first item brought to the table was mashed potatoes followed by a huge platter of Lutefisk, corn, cranberry/marshmallow salad, mashed rutabagas, Swedish meatballs and lefse.

Watching the others I learned that after putting the Lutefisk on your plate you smother it in melted butter, add salt & pepper to taste and enjoy. And I DID! It was very good and I had a couple of helpings. The rutabagas were okay, they had the consistency of squash. I really like the potato lefse with butter and cinnamon sugar. The mashed potato's and Swedish meatballs were incredible good. 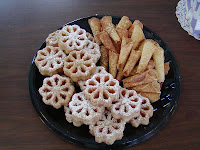 Following the meal the dessert began to come out of the kitchen. WOW!!! Pastries and goodies that were mouth watering. Those goodies and strong black coffee made for the perfect end of a great meal with good friends & fellowship.

Final thoughts on Lutefisk: Not too bad. I would not want to eat it every day but I it was a surprise to me that it was very tasty! If you get the chance ... give it a try! 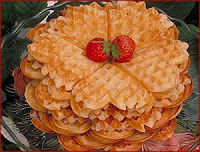 You eat the lutefisk, I'll eat the kringla!

Boy, you do have some different food up north there. Any venison yet? Big Bro.... 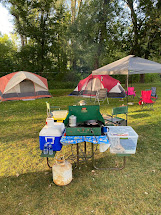